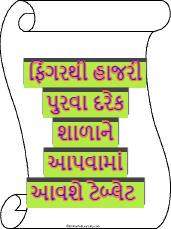 A function was organized at Gandhinagar on September 5th to mark Teachers' DayThe ceremony was called to honor West teachers from different districts of Gujarat. The meeting, called under the chairmanship of Chief Minister Shri Vijaybhai Rupani, was honored by the best teachers. And to honor teachers He came to this honor when Chief Minister Shri Vijaybhai Rupani was standing to give his lecture.

Or even apply fingerprint indians program to all departments except Education Department Will be givenIt should be honest in the education department that he also mentioned them in his speech and he called for creating an atmosphere of trust in the teachers. This Chief Minister Shri Vijaybhai Rupani has indirectly told the teachers that within the teachers department there is a deficiency or So the atmosphere of mistrust that has arisen has been fulfilled and the education department is well equipped The call made by Shri Vijaybhai Rupani is a humiliation for all the teachers of Gujarat, but in other words the truth is also being felt because some people have said such things to them. Yet most of the people inside the education department are honestly working or even a government car. In my opinion, teachers are not responsible for creating a new environment for the programs not being able to do their work. By exempting them from their work, the teachers were forced to do no work other than their own education We are hoping the public does