The education department has taken a big decision keeping in view the ever-increasing transition of corona in Gujarat. Offline education as well as examinations in 8 municipal schools and colleges of the state have been postponed till April 10. Education Minister Bhupendrasinh Chudasama said that offline education as well as examinations will be closed in all schools and colleges in 8 Municipal Corporations of Gujarat. Schools and colleges in Ahmedabad, Surat, Vadodara, Rajkot, Gandhinagar, Jamnagar, Junagadh and Bhavnagar will be completely closed. However, online education of students will remain the same. On the other hand, the decision will be voluntary for areas other than 8 municipalities. This means that children can go to school for offline education if school administrators and parents want. On the other hand all the practicals will continue. Bhupendrasinh Chudasama said that the examination schedule will be announced anew. In addition, college and university examinations starting tomorrow have also been postponed till April 10. 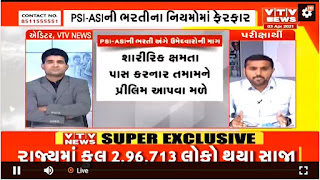 Following the increasing cases of corona, examinations in colleges have also started from today, starting from school-colleges. Manpah has not been able to order the closure of schools and colleges even though the cases are on the rise as the government has ordered the reopening of schools. An important meeting of the education department was held today. In which it has been decided to do all the educational work online till 10th April. The government has decided to stop offline education as cases are on the rise in the state. All standard students will be taught online. Corona's curfew has been ordered to close schools and colleges. At a time when children are studying and having fun together in primary school, there is a growing fear among parents that if one of them shows symptoms of corona, the other could also be infected. Were coming.