Mild sanitizers are also a cause of Mucormycosis Fungus. Read this Gujarati news

The weapon against the corona turned out to be a friend of the black fungus, now read this necessarily before using the sanitizer.

In addition to steroids, the sanitizers available in the market are also responsible for the black fungus.  Cheap sanitizers are high in methanol.  Which helps the fungus to grow.  Now before using the sanitizer, make sure that it is of good quality and original.

Be careful if you are buying an inexpensive sanitizer to avoid corona infection.  This cheap sanitizer can hurt you.  The role of this sanitizer is also being seen today in the case of the growing black fungus in Corona infected individuals.

Research has shown that in addition to steroids, dust particles and counterfeit sanitizers on the market are also responsible for the black fungus.  These cheap sanitizers contain excessive amounts of methanol.  Which kills the eye and nose cells and creates a good environment for the fungus to grow. 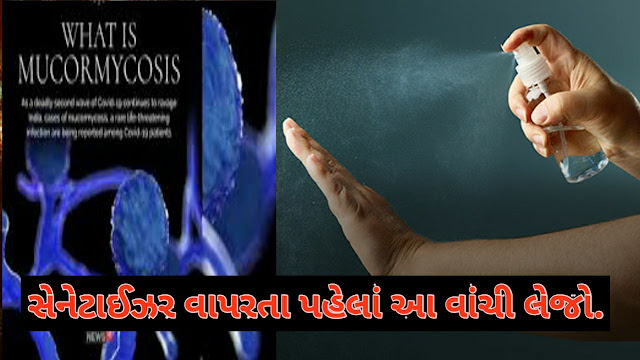 Now Mucormycosis are 2 types White Funus and Black Fungus.  When we take this spray sanitizer around our face and spray it, a small amount of it gets lost in our eyes and nose.  This kills the cells of the eyes and nose, including the retina.  This sanitizer contains around 5 percent methanol which creates a good environment for fungus to grow.  This causes the retina of the eye to deteriorate as well as the light gradually diminishes and the person becomes blind.

The sanitizer sold everywhere today contains about five percent methanol.  Which damages our skin.  Sanitizers are being sold anywhere without any kind of standard and regulation.  So only liquid sanitizer, do not come out with drop lettuce or use spray sanitizer.

How do you know if your sanitizer is Original or fake ?

Fake sanitizers contain low levels of isopropyl alcohol.  While in real sanitizer its amount is 70%.  If you spray sanitizer on your hands, it smells good when sprayed.  When you spray fake sanitizer, it will start smelling.